To test a website that uses client-side dynamic pages, we need to mimic a user interacting with a web browser. We will use an end-to-end testing framework called Cypress that controls Google Chrome like a user. When testing your project, be sure to read about starting the server before running tests.

Make sure your entire project path contains no spaces. Your path may be different. See the instructions to Create a folder.

If you’re running the Windows Subsystem for Linux (WSL), check your version. Cypress and headless Chrome work correctly on WSL 2, but not WSL 1.

Start a Windows PowerShell. Verify that you are using WSL 2. Follow the WSL Tutorial if you need to install or upgrade. Your Ubuntu version may be different.

Pitfall: Make sure you are a non-root user.

We’ll run insta485 in Google Chrome and have Cypress control it during end-to-end tests.

Make sure that you have Chrome version >64. Your version may be different.

Install Chrome on macOS if you don’t already have it.

On WSL, even if you have the Chrome browser installed through Windows, you still need to install Chrome to Linux via apt-get.

To open Linux GUI applications invoked through WSL, you’ll also need a Windows X server. Install VcXsrv. After installing, you might have to adjust your firewall settings to allow VcXsrv to work properly. To do so, click Start and type “Windows Defender Firewall” and hit enter. Select “Allow an app or feature through Windows Defender Firewall”. Now, click “Change settings”, look for “VcXsrv windows xserver”, and make sure it is checked to the left, and checked under “Private” and “Public” like in the screenshot below: 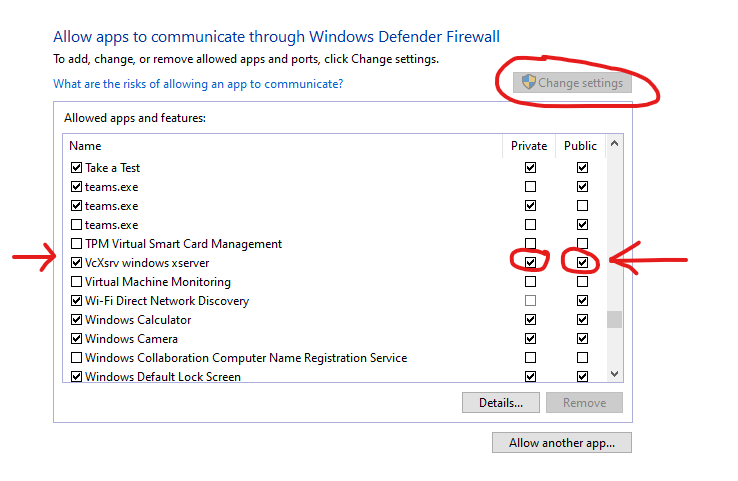 Now that VcXsrv is installed and your firewall settings are correct, you can launch it from the Start Menu > VcXsrv > XLaunch.

When launching VcXsrv, make sure to select “Disable Access Control”. 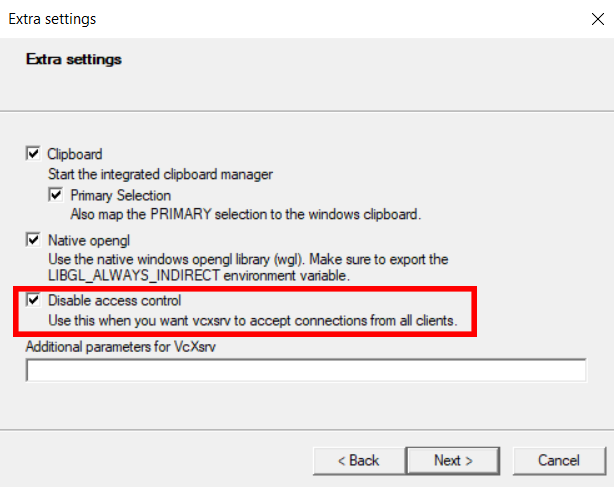 After VcXsrv is launched successfully, the icon should appear in the system tray. 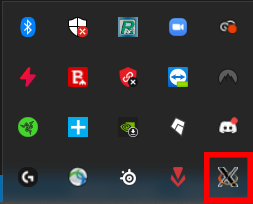 Next, Edit your WSL .bashrc file and add an environment variable containing the address of the X server display.

Restart WSL. If you reboot your computer later, don’t forget that you need make sure VcXsrv is running.

Start Chrome from Linux and verify that a Chrome window pops up.

Cypress allows us to automate finding elements in the DOM and navigating the web page under test. It can programmatically click, scroll, and type.

Make sure Cypress is installed. In EECS 485, this is just a sanity check: Cypress is included as a dependency in the provided package.json. If you’re working on a side project, you might need to do npm i cypress. Your version may be different.

Run a simple test which visits eecs485.org and then both opens and closes the sidebar. First download an example test and open Cypress.

Choose Chrome. For now, don’t worry about the “Cannot Connect Base Url” warning. When you’re testing your project, you’ll need to have your Flask server running, but this test doesn’t require your project.

Click test_cypress_hello. The test inside that file will automatically run.

At this point, we recommend you read the source code of the test so that you know what it does. You can open the test file manually in your code editor, or click the name of the file at the top of the middle section of the screen and it will automatically open in your editor.

Now we’ll explore some of Cypress’s features. Hover your cursor over one of the lines in the Command Log (middle portion of the screen). This is called time traveling.

In the above screenshot, we’re hovering over line 3 in the Command Log, which asserts that “Files” is visible. At the same time, we see in the preview pane at the right that Cypress is highlighting the element which contains “Files” and scrolled it into view. This shows what the website looked like at the exact moment in time when that command ran in the test. If you hover over a different line, the view will change. Move your cursor out of the Command Log to stop time traveling.

In the above screenshot, we clicked the first line in the Command Log which says “- click”. This pinned a snapshot to the screen, so that hovering over other commands won’t travel back in time to them. Notice on the right that you can choose “Before” or “After.” This is possible for certain actions like clicking a button, allowing you to see how the website changed after the button was clicked. With “Before” selected, the sidebar is visible. After clicking “After,” you should see this:

Now the sidebar is hidden.

When a command is pinned, you can inspect the DOM with your developer tools at specific points in time. Pinning a command will also copy extra information about that command to the browser console. After clicking one of the “contains” commands, opening the browser console will display this:

The console tells you specific details about the “contains” command yielded, including the DOM element. Other commands will give you different information.

Before you run Cypress on insta485 for Project 3, read the Testing section of the spec.

Pitfall: Don’t use features that require the database while debugging a test that uses mock data.

Some tests (not the above demo) intercept API requests and respond with mock posts. When you run a test with mock posts, you won’t be able to successfully perform database operations that aren’t also mocked. For example, don’t try clicking “unlike” after running test_scroll_public.cy.js: that will send an API request that doesn’t get intercepted, and your REST API will get a request for a post that doesn’t exist. Instead, you should test like/unlike behavior in a test with real posts, like most of the tests in test_index_public.cy.js.

This document is licensed under a Creative Commons Attribution-NonCommercial 4.0 License. You’re free to copy and share this document, but not to sell it. You may not share source code provided with this document.